“My Own Worst Enemy”

31 Then [Jesus] began to teach them that the Son of Man must undergo great suffering, and be rejected by the elders, the chief priests, and the scribes, and be killed, and after three days rise again. 32 He said all this quite openly. And Peter took him aside and began to rebuke him. 33 But turning and looking at his disciples, he rebuked Peter and said, “Get behind me, Satan! For you are setting your mind not on divine things but on human things.”

34 He called the crowd with his disciples, and said to them, “If any want to become my followers, let them deny themselves and take up their cross and follow me. 35 For those who want to save their life will lose it, and those who lose their life for my sake, and for the sake of the gospel, will save it. 36 For what will it profit them to gain the whole world and forfeit their life? 37 Indeed, what can they give in return for their life? 38 Those who are ashamed of me and of my words in this adulterous and sinful generation, of them the Son of Man will also be ashamed when he comes in the glory of his Father with the holy angels.”

While you wouldn’t know it by talking with me now, I used to dread the idea of having children.  When I was much younger, I thought of children as being these noisy, messy, needy, disruptive little creatures with whom I wanted little to do.  Even Scripture described children as being a pain for their parents from the moment they entered the world.  When I read those words in Genesis, describing the punishment that women must bear by enduring pain through childbirth, my thought was “Why would anybody want to go through this just to bring a child into the world?  Why would I want to put somebody  I love through this sort of pain?”

Of course, this was an awfully immature attitude toward children; just about as immature as Peter’s attitude toward his Lord’s revelation of what is to come.  As Jesus walks with his disciples on their way to Caesarea Philippi, he asks them, “Who do you say that I am?”  When Peter answers, “You are the Messiah,” Jesus sternly warns them not to reveal what they know.

And yet, our Teacher now believes that his pupils are ready to learn a new lesson.  As they continue on, Jesus explains what it truly meant for him to be the Messiah, God’s chosen one.  The victory that their Lord had been sent to accomplish would not be won through the defeat of Roman forces.  Rather, it would come through Jesus’ own “great suffering.”  And though he reveals to his disciples that his death is a necessary part of God’s plan for salvation, Peter isn’t willing to hear any more of this.  And so, he misses out on the really Good News, which is found in the final victory of God over death through the resurrection.

Thinking back to my juvenile attitude toward children, I recognize how preposterous it was to think that the pain of childbirth couldn’t be worth the result.  Of course, in that moment, as Kara was bringing our children into the world, I wish that I could have taken this pain away from her.  But I couldn’t.  It wasn’t within my power to do so. 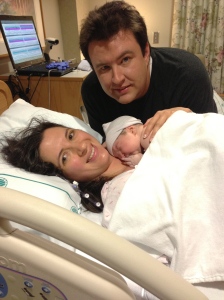 The look on Kara’s face says it all, as she embraces our newborn daughter!

Thankfully, the pain is only momentary. And when it passes, life will never be the same for the parents who endured it.  If you ask a mother whether or not the suffering is worth the reward, most often you will hear an unhesitant “Yes!”

This is the same attitude that Jesus has as he faces his own walk toward the cross.  Our Lord does not deny that the path ahead is an agonizing one.  And yet, he is focused not on the temporary moment of his suffering.  Rather, he is fixed on the eternal joy that he shall experience in the new life, shared with all the faithful, when he is reborn from the tomb.

But in order for him to continue on this path, Jesus must first convince Peter to step out of the way.  The disciple’s defiance, while misguided, is ultimately an act of love and devotion.  Peter has given his life over to Jesus, and now, he would do anything to keep his Teacher from harm.  But sadly, his interference poses a much greater threat than the cross.

When Peter takes Jesus aside and begins to reprimand him, our Lord commands his pupil: “Get behind me, Satan!”  While it sounds as though Jesus is insulting someone who loves him greatly, his intention is to call the disciple to recognize the role he has taken on.  As we saw last week, Jesus has already encountered Satan and overcome the temptations that had been laid before him.  And now, Peter is taking on this same role.  But Peter is not just playing the tempter for Jesus.  Peter is tempting himself.  In this moment, though he doesn’t know it, he is his own worst enemy.

By “setting [his] mind not on divine things but on human things,” Peter has unwittingly laid a snare before his Lord.  However, Jesus is not about to be caught in this trap.  In ordering Peter to “Get behind me!” our Lord reminds his disciple of his place.  If Peter would remember what it means to be Jesus’ disciple, he will see that it is not his place to take Jesus aside or to stand in his way.  His place is to follow close behind.

And if we are honest with ourselves, aren’t we already there?  If we look at the world around us—filled with so much anger and hate, so much needless suffering and pain, so much death—is it really that hard to see that death is already here among the living?  Even if it hasn’t claimed our lives yet, death has certainly laid claim to the world.  So, why are we fighting so hard to hold onto this deathly existence?

Perhaps like Peter, we struggle to see the promise of the resurrection through the darkness of the tomb.  Perhaps we have been in this darkness for so long that we have actually become comfortable with it.  Why risk the unknown of the resurrection life when we can become quite prosperous in this deathly existence?

Like Peter, we each become our own worst enemies. When we question the value of the pain that Jesus is willing to endure, we actually become the heavy stone that is rolled across the doorway; we are the ones who hold ourselves captive in this tomb.  When we choose to pursue the temptations of this world, we accept a lesser vision than the one that God has in the plan of redemption.

A view from the inside of a garden tomb at Bethpage. The large stone to the right would be rolled in front of the entryway to serve as a door.

But today, Jesus invites us to hear the Gospel and to give up this life for the sake of this good news: we are being called to come out of this tomb and to take our places at this table.  At this table, all who come unashamed are nourished through the body that is broken and the blood that is poured out.  Here, we remember that even when faced with the temptation to step away, Jesus steps forward.  And here, he invites us to step forward with him.

So now, let us take our place behind the Teacher.  As he leads us out along the path to the cross, let us follow in faith.  May his path lead us through lands where we might join him in sharing the Good News, witnessing through acts of love and compassion.  As others witness us on our journey, may they be come to learn of the Good News, so they too might stop being their own worst enemies, standing in the way.  And as we march on, may we who would follow Jesus take up our crosses in the assurance that the one who shall save us from these devices of death leads the procession into everlasting life.

In the name of the Lord Jesus Christ we bend our knees and lift up our hearts, giving glory to God forever. Amen. (Philippians 2:9-11)

This sermon was delivered at Bowling Green Presbyterian Church on Sunday, March 01, 2015 (The Second Sunday in Lent).

Some of what crosses my mind between Sundays